Shopping Cart
Your Cart is Empty
Quantity:
Subtotal
Taxes
Shipping
Total
There was an error with PayPalClick here to try again

Thank you for your business!You should be receiving an order confirmation from Paypal shortly.Exit Shopping Cart

Monday, June 21st. I was on the computer today and then taught my computer class in the evening. It was one of those days when either you eat leftovers or you cook something for yourself.

Someone made Ramon Noodles, another child cooked eggs, but I believe most of them ate the leftover enchiladas, rice, and beans.

Tomorrow is Rebeca's Birthday party. I started a batch of beans. Since they were older, I thought I had better start cooking them tonight so they will be soft by tomorrow.

Tuesday, June 22nd. I got up early today and made Malt-o-Meal for breakfast and then a big batch of goulash. I had made the enchiladas and they were in the freezer, but the family had already eaten 4 pans of them. Plus Rebeca said she wanted the noodle stuff with the cheese on it. I made 6 pans of goulash, then I made 22 small loaves of Poppy Seed bread. Elizabeth helped me and she made a new batch of homemade popcicles.

I cleaned the kitchen, cleaned the refrigerator, did mounds of dishes and by noon, I was tired. I took a break and watched some TV, and now I am here reporting on things.

I still have to make 2 large pans of rice, make some cheese sauce, and finish the beans before everyone comes, but I still have 3 hours.

Felipe, David, and Papi (Fito) spent the day making a wood enclosure for our outside shower. That way after they swim, they can rinse off, now in privacy, and then hang up their things outside (as yesterday he hung up a clothesline.

I have to confess: I bought some things. We hadn't had milk for several days as the dairy requires that we call and reserve the milk, and then when we finally made arrangements to go and get some, they had had some problems with their equipment and were not selling any.

That is one of the reasons I why I was on the computer yesterday. I was trying to find a new dairy--also a cheaper one as they charge $5.00 per gallon. I finally gave up, but not before learning that Braum's milk is local and they get the milk from the cow to the store within 72 hours and usually within even 24 hours.

I told Fito, that I really want to stay true to the experiment, but that I also have a life! I am trying to finish up my degree, start a new business, I take care of my mom, 6 children are at home... And frankly, the thought of having to make my own bread, my own cheese, sour cream, butter, and so on is really hurting my time management quota right now. The other time consuming thing with fresh milk, too, is that you have to pasteurize it and then wait for it to cool.

I told him that making bread isn't that hard, but the whole milk, dairy stuff was just draining me right now. So I sent him to Braum's yesterday to buy milk.

One other confession, too. I sent Matthew today to Sam's as we were out of disposables for my Mom. I also told him to go ahead and purchase candy for the pinata and a cake for Rebeca's party. Our second deviation away from the experiment, but when I told Rebeca that I was going to make her cake, she was so disappointed, that I conceded. Birthdays are the only time I buy cakes from the store.

When the children are little, they think the pretty frosting is what makes a cake better, but as they age, they come to the realization that homemade cakes actually taste better and then they want mom to make the cake...oh well.

I guess I could take a cake decorating class...but that will probably be in another lifetime. Pottery, painting, and drawing come first on my list.

I was just on youtube, looking for some videos to share with you and I found this one. Makes me realize that worrying about making cheese is small...very small...I show videos like this to my children when they are whining or complaining...I guess I needed it today.

The following video shows the true meaning of serving and helping one another. See the LDS Philanthropies website http://www.lds.org/ldsfoundation

Wednesday, June 23rd. I got up early today and just worked on school and work. I did clean off my desk and filed papers. It always feels so good when you organize something.

I did not cook one thing today, but I did not need to as we had plenty of food left over. Now to finish with Rebeca's birthday party. We only had 6 families show up so I had 9 pans of goulash and enchiladas left over, 2 containers of beans, and 2 plastic containers of rice, and a small container of cheese sauce. I froze 4 pans of food to keep for later.

We ate left overs yesterday, but for today, I have some leftover taco meat in the freezer. I will pull it out today. That way we can have something different with the rice and beans. In addition, I had made yellow rice and orange rice, so we have more of a selection.

The saddest thing that happened yesterday is that I was carrying the cake outside so we could sing Happy Birthday. I slipped, the cake slid forward, did a flip, and landed upside down on the tile. It's a good thing we had just cleaned the floor (and aren't that picky anyway). Because I just scooped it up and put it back on the container.

Yes, this was the beautifully decorated cake with flowers on it that my little girl had specifically wanted and now we had a messed up mountain of cake that looked like something I could have done.

One of the mothers asked me if we had any plastic people or animals. I ran back in and gathered the little girls miniature plastic horses, a couple of match box cars, and some sprinkles. I didn't have birthday candles so I used 7 white votives. We turned it into a magical mountain, and then acted so pleased with what we had done, laughing about it falling...

Well it worked! No one was upset, not even Rebeca. We laughed and told her that it would make a great story and that she would always remember the birthday that her cake fell. 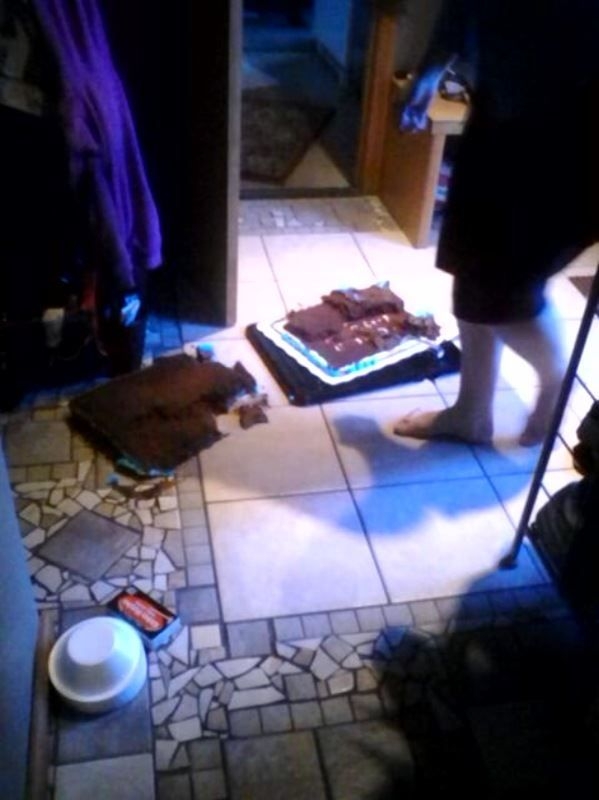 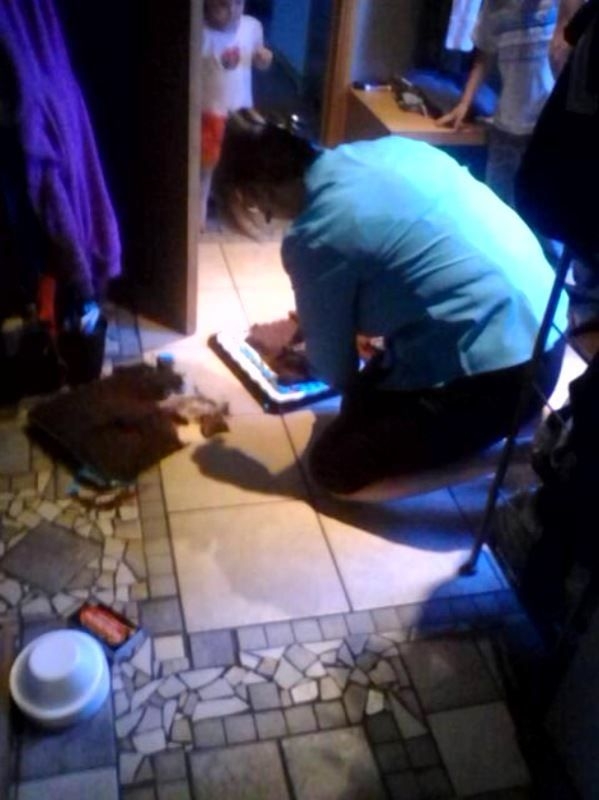 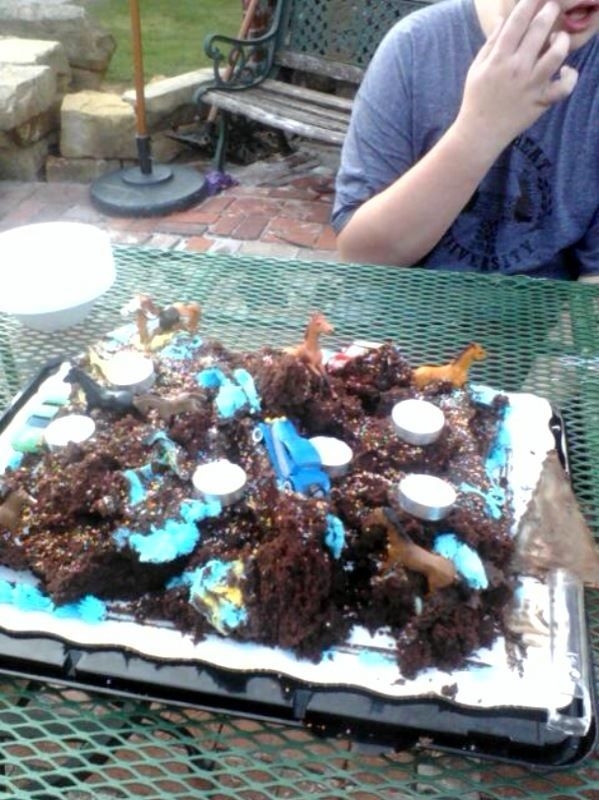 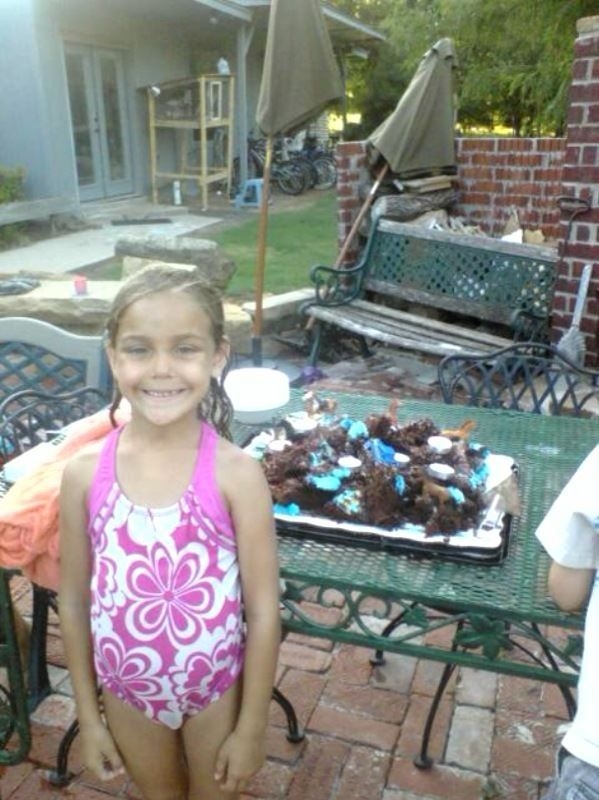 Thursday, June 24rd. I got up early and worked all day. I finally signed up for Facebook and Youtube. I needed to sign up for Youtube so I could upload the video of my student (on learning page). I have been meaning to get on Facebook for sometime now, but have procrastinated.

You all were right. What a fun way to keep in contact and find old friends and family.

The only thing I cooked yesterday, was to heat up the last "ready to eat" box of Chinese food from Sam's Frozen Foods. It was in the freezer and was our last "convenience" food left...but it sure was good.

The children are still eating the left overs.

Friday, June 25rd. Today I made pancakes and then after I was done with them, I made a batch of homemade bread. We only had 2 slices left of bread. I ground some wheat and I made it about 2/3rds white flour to 1/3 whole wheat.

I made some of it to make French bread (2 big loaves) to eat with the goulash and then made 3 small loaves of regular bread and then I took the rest and made super gooey cinnamon rolls.

I was just in the kitchen doing the dishes and cleaning and the 2 French loaves were in the oven. Oh! I forgot how good fresh bread smells! It is 4:30 in the afternoon and I have not eaten since 8:00 am. My mouth is watering, my stomach is telling me that it wants me to slather butter on a slice of hot bread...

I just took it out of the oven so in about 10 minutes, I get to eat!

I also found about 1-2 cups of chicken pieces in the freezer. I took it and added it to 6 packages of Ramon Noodles. I also added a little onion powder, salt, and pepper. Just so the children have a change from the left overs.

Yesterday, I had gone to teach a Spanish class and on the way home, I was grumbling about having to make bread. I thought, "It is too hot. It will heat up my house. I do not really have the time."

Now that the delicious smell is permeating the house and the chewy crust and soft bread is right in front of me...all my doubts have faded. Actually, I had forgotten just how easy it is, and how quickly the whole process goes. Yea, for the experiment!

Saturday, June 26th. Today I got up early to take David to an Eagle Scout project. There were so many people there they asked some of us to clean the church which we did. Then I went outside and was talking to one of the dads. Later, I helped with the project and then we did a couple of errands and headed for home.

In the evening, Fito, Rebeca, and I went to the Spanish Church to a party they were having for Father's Day. Incredible food! The ladies had me bring Poppy Seed Bread, which I did, but we had Carne Asada, a Spanish potato salad, a salad made with cabbage, cucumber, tomato, and ?, guacamole, rice, beans, cheese sauce, salsa, and watermelon. Oh my goodness! We ate soooo good. I will try to get the 2 salad recipes for they were incredible. One of the ladies is from Mexico and the other is from Venuzuela.

We danced, played silly games, and had fun.

Sunday, June 27th. Today I made waffles for breakfast then went outside and cut flowers to make an arrangment for church.

After church, I had to stay for a meeting so by the time I got home the children had made Ramon Noodles, however, they should have waited, because I grilled some chicken drumsticks and made a batch of rice. Then I heated up some beans and buttered some thin slices of the homemade french bread and toasted it in the oven. We ate good!

Maria and Travis made some brownies later, but took most of them to a dinner they were going to. Well that won't do around here...I made 2 large pans and put whole wheat flour in for half the flour. Actually, I like the texture , sort of chewy crunchy.